The Rapture with Delroy Gayle

Between the Left Behind movie series, big selling apocalyptic books, and end-of-the-world Christian radio pundits, the Christian notion of the rapture has become fantastically popular. No one would guess that this upstart doctrine is only 179 years old. Now that may seem like an antique to some, but in light of the fact that church history spans twenty centuries, a 19th century doctrine is a spring chicken. But, just because the idea that Christ will come to rapture the church to heaven for seven years is young, does that automatically make it wrong? Of course not. Ultimately, as Christians, the Bible is our source for making such determinations, though we would have to admit that any doctrine that eluded the church for eighteen centuries should be subjected to the most rigorous testing.

Author and speaker, Delroy Gayle of London is our guide to discuss the history and biblical support for the pre-tribulation rapture. He has done his homework, and confidently explains where the idea came from, why it is incorrect, and what we should believe instead. Tune in to this show and you too will become equipped with what you need to know in order to distinguish between the hype and the truth. 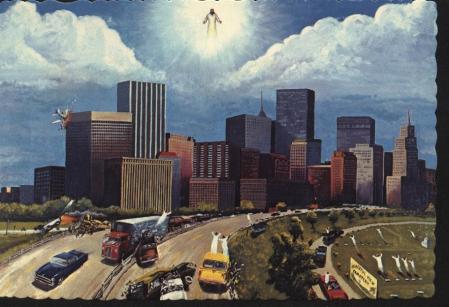 This entry was posted on Sunday, April 19th, 2009 at 12:00 am and is filed under Show. You can follow any responses to this entry through the RSS 2.0 feed. You can leave a response, or trackback from your own site.

9 Responses to The Rapture with Delroy Gayle